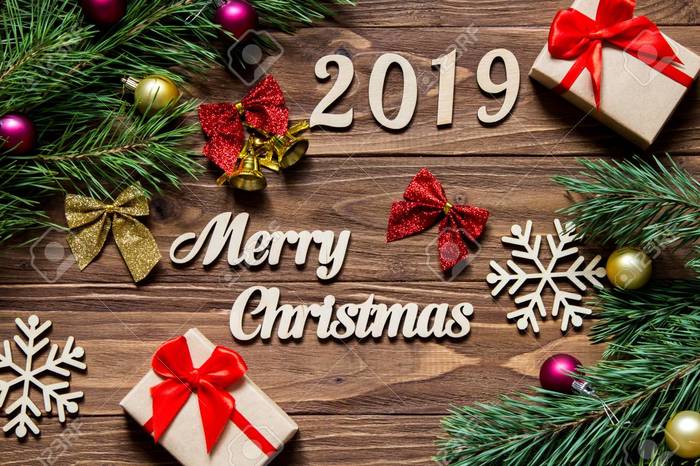 The present which got everything started!

Chad woke up that morning, like any other Christmas morning, to the sound of the kids wanting to open presents.  But this day would end up being very different from any previous Christmas Day, because on this Christmas Day, the Brew Kit was opened.

After all the kids had their presents put together and breakfast was eaten, it was time to try out the awesome present Chad's wife got him.  On that day, the first beer was brewed, a Hefeweizen, and the journey started. 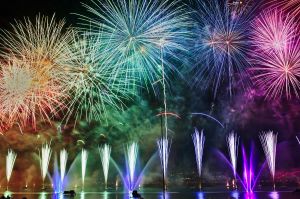 And the partnership was started!

Keith was over doing a Fall Cleanup at Chad's.  A little chit chat was happening and Christmas Presents came up.  Obviously, the awesomest present ever came up, to which Keith said he had always wanted to brew beer.  Fall Cleanup was finished and Keith went home and ordered his Brew Kit. 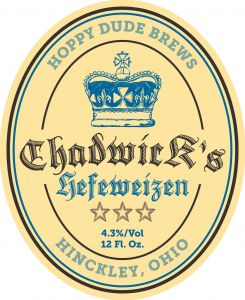 And the first brewed beer was drank!

Prior to the day, measurements were taken for Final Gravity and a calculation of ABV of 4.3%.  Keith was over as was Chad's dad Danny.  We brewed the IPA and enjoyed Chadwick's, probably a little too much enjoyment.  We were slurring our words and stumbling before the brewing was over, well at least one of us was.  Out of the 51 bottles, we ended up drinking 37, between the three of us, that day.

Something didn't seem right though.  This beer was calculated at 4.3%, right at the same ABV as a Bud Light/Miller Light/Coors Light.  So, why did it hit us so hard?

Mistakes will happen, but this mistake was in the calculating of the ABV.  When we re-calculated, we realized it was 7.8% not 4.3%....Amazing Efficiency and big Rookie Mistake! 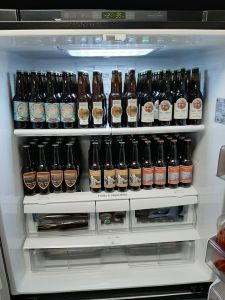 First Tasting of our beer!

Thinking we were experts at brewing and feeling pretty good at what we had brewed so far, we scheduled our first tasting event.  We knew we were bias of what we had made so far, so it was time to share and get some feedback.

We had a little over 20 people who showed up to sample what we had made so far, six beers at that point.  At the tasting we also brewed our Czech Pilsner - Hoppy Pillz.  Needless to say, the tasting turned out great.

Thank you to Jimmy Schill at Schill Grounds Management for allowing us to use their awesome meeting room and kitchen area for the tasting! 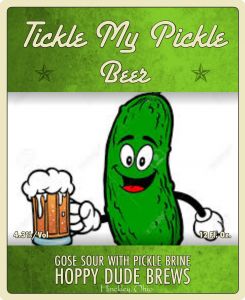 Every brewery has a signature beer!

Before we even started brewing, we wanted to make a pickle beer.  Now, some of you are making a face right now..."Gross".  Ever been to the Pickle Fest, in your local city?  Well we have and the one thing missing is a pickle beer.  Don't knock until you have tried it!

We start by making a Gose beer and then adding in Coriander in the boil.  Into the fermenter for two weeks.  At bottling we add the pickling flavor and let it bottle condition.

Talk about a beer that goes extremely well with a hamburger or a hot dog.  Did anyone say barbecue? ..... mmm mmm mmm. 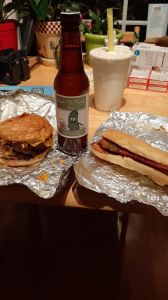 Just as it is intended to be enjoyed!

Yes Please!  Just as we hoped, our pickle beer - Tickle My Pickle is amazing and is just what we were wanting.  Yes, there is a LOT of bias there, but if you like dill pickles, you will see and it will be a favorite of yours also. 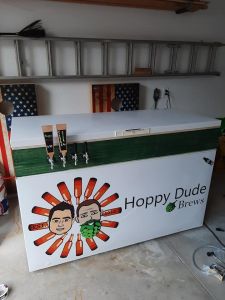 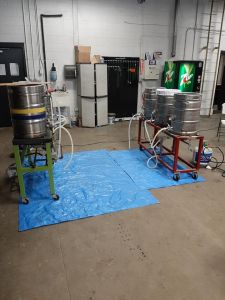 Busy 20 hours but the start of some legitimacy!

Friday night, we drove to Tiltonsville, OH to pick up a freezer to create our keezer. Left around 5:30pm and got back around 11:00pm.  Got the freezer off the trailer and then to bed.

Saturday morning, 5:30am, we are on our way to Clawson, MI to pickup our second brew system....a three keggle system to allow us to double our brewing capacity.

We didn't stop there.  We turned that Freezer into a Keezer with four taps . 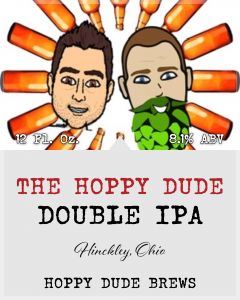 By popular demand - THE Hoppy Dude is born!

We pulled an All nighter, bottling a batch of our Tickle My Pickle, brewing a new batch of pickle and we breweed a new addition to the family - THE Hoppy Dude.

THE Hoppy Dude is a double IPA, using a total of 30oz of 6 different kinds of hops.  We wanted to make sure that it had the bitterness to be considered a double IPA.  Most IPAs have a bitterness (IBU) between 55 and 75.  THE Hoppy Dude, will hit 115 IBUs.

Should be real nice and hoppy to satisfy those IPA drinkers who want a hoppy beer.

This tasting was fun and had people who were not at our first tasting.  Different beers in this tasting, to provide a Summer Beer tasting event.

Thanks to everyone who came to participate but special thanks to all the volunteers we had, helping us pull this event off.  Your support is invaluable.

Great feedback from those who participated and provided us that assurance that are beer is pretty darn good. 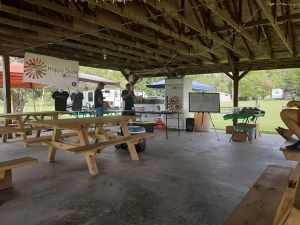 Hoppy Dude Brews went mobile.  We traveled to Terrace Lakes Campground to put on a tasting event.  Thanks to the owners, Chad and Laura, for the hospitality and the opportunity to put our beer in front of large group of people, whom we did not know.

Over 80 people at this tasting event and an opportunity to truly see if our beer stands up against other beer makers.  Many participants were the big beer company drinkers so the feedback we received was very good.  This is important because, what we consider tainted taste buds, were drinking our beer and liking it. 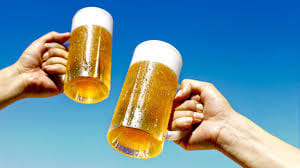 We have our first official approval!

So its official, unanimous vote in favor of Hoppy Dude Brews opening in Hinckley, Ohio.  Hinckley Township Zoning Appeals meeting went well and the votes went our way to use the building for brewing beer.   Now onto state and federal paperwork and inspections to get our beer making/selling license.

Work to do on the building will start to get us ready for those state and federal inspections.  Thank You to Hinckley Township for the approval and allowing us to be part of this great community.  Looking forward to the lasting relationship.

FROM THE VERY BEGINNING...

we have had the confidence that we can be successful.  As we continue and so far the accomplishments we have gained, we still feel we are going to be successful.

A lot of time and effort goes into this but no goal comes without blood, sweat and tears.  Sacrifices are constant but the hope is those will become less and less over time.

Without the awesome wives, we both have, this would not have gone as far as it has.  Thank you ladies for allowing us to continue this journey and your support all along the way.

Every beer is different.  What we have learned along the way has allowed us to gain invaluable knowledge to help us make our process more efficient every time.

We are always making the process better, which comes from the experiences we have had.  We also love the feedback from our friends and family and our participants at our tastings.